Dillon Beach, California was a beautiful and romantic get-away for my boyfriend, dog, and I.  We arrived at Lawson’s Landing late at night through heavy fog on a Friday night.  We quickly set up camp despite the freezing cold temperature – and got right into our sleeping bags.  I bought my dog a special camping bed – temperpedic to boot – but due to the cold night, my 90-pound black lab/pit-bull was cuddled in between the two of us shivering until we let him under the covers.

Saturday, we woke up early as the sun woke up around 6am.  We had the entire day ahead of us and I only had plans to that would occupy our morning.  We set up our campsite “kitchen” and had a bowl of cereal… we then walked Biggie Smalls up and down the road to scope out the campsite area.  We picked up some fire wood and attempted to build a fire but failed – we needed lighter fluid and brush.  Notated, what we needed to build a successful fire, we decided we would pick up those items after lunch.  Danny made sandwiches and we packed them in a day bag.

We drove south down the coast towards Pointe Reyes Station on highway 1.  We stopped at Hog Island Oyster Company to pick up a dozen of my most favorite oysters.  I am an oyster queen – I could eat them all day and absolutely love those things!  Danny…not so much a fan.  We bought a bottle of their Hog Island Oyster white wine which they said paired great with the oysters.

On our drive, back, we stopped by some large boulder rock formations on our way into the town of Tamales.  There we could see out over the coast and the landscapes were that very like Ireland.  We stopped there for lunch and let Biggie run around for a while.

By the time we got back to the campsite it was just a little before noon.  We decided to hit the bait shop by the campgrounds for lighter fluid, snacks, smore’s goodies, and hoodies (because it was super cold).  We walked with Biggie by the bay, and hung out on the beach for a few hours tossing his toy around and just chilling, taking in the breathtaking scenery.

I couldn’t get over how much this area of California reminds me of Ireland. Although I went there when I was a little girl – those memories are still as vivid as ever.

A few hours before the sun went down we went back to camp.  We turned on some country music and began BBQ’ing our oysters.  This was such a delight for me – I loveeeee oysters!  The wine was outa this world good and perfect complement to the oysters.  We enjoyed them with a kale salad.  We made a large fire and began to cook ourselves some smore’s.  The evening wound down and to my surprise I was tired so I went to bed right as the sun set, knowing that the following day I had planned another adventure in Point Reyes for us…

Easter Sunday, we woke up again as the sun rose… this time, rain came along as well.  We hustled to pack up our campsite and get Biggie in the car before he was drenched.  He still smelled like a wet dog but it was tolerable.  We drove down south from Dillon Beach and into Point Reyes Station.  It was a downfall of rain at this point in the morning so we were relieved to find the brunch spot I choose wasn’t too packed for Easter Sunday.  The Station House Café had wonderful reviews on Yelp, and the food looked delicious.  I was eager to bring my boyfriend there as he is a huge brunch guy. They had a special menu for Easter Sunday – from which I ordered Dungeness crab on avocado toast, and my boyfriend had the Croque Madame.  Both dishes were out of this world.  We took home a bag of their housemade granola and enjoyed a few mimosas.  After brunch we walked down to the Cowgirl Creamery.  The girl who helped us provided excellent service and gave us a tasting of 8 different cheeses.  We walked out with the Bay Blue Cheese, and Red Hawk both for our moms.

The ending to our Point Reyes Station day was heading to the Heidrun Meadry where we learned about sparkling wine (champagne) that is derived from honey instead of grapes.  These were absolutely the sweetest sparkling wines I have ever sipped.  You can notice the hints of the various aromas that the honey is derived from, and almost a sweet fruit flavor to each tasting.   We took home a rosemary plant from the meadery to add to our herb garden back home, and got back on the road for the two hour journey south. 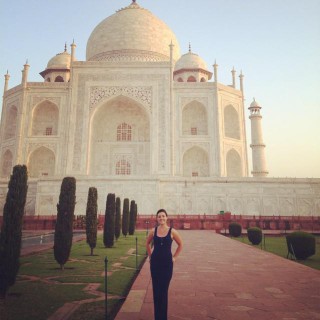 I currently live in the Silicon Valley in pursuit of my career in the legal field. I hope to one day become a lawyer as a way to contribute to my community and make a positive difference in people's lives.